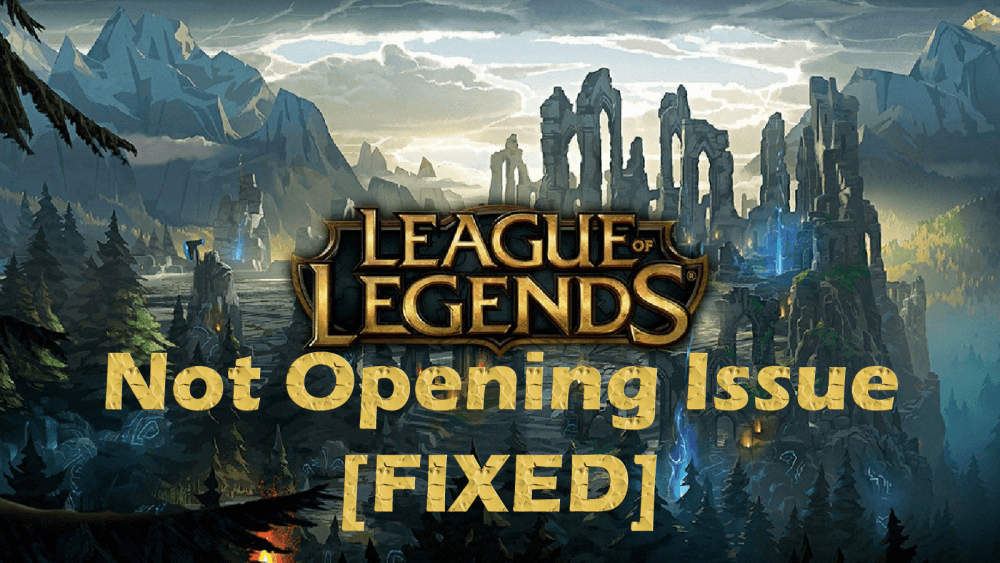 How to fix League of legends not opening error on Windows 10?

If you have league client not opening issue, then this guide is for you. League of legends not opening is an old error gamers face on windows 10 computers. Riot Games always update their games but some bugs like opening errors still on every version. Don’t worry we have a solution for your problem, follow all of our easy fixing methods to solve League of legends malfunction.

Causes behind League of legends launcher not opening

IF you face lol client opening issue, then You can face 4 scenarios:

How to fix League of Legends launch error?

Before making any change first, restart your computer and try to open League of Legends again. Sometimes this simple trick works like magic.

We tried every method before writing this article. So, follow every fix carefully and solve your issue in a minute.

Step 3: Right-click on them and select “End Task”

There are several ways to remove display drivers, but we suggest to use Display Driver Uninstaller to uninstall drivers automatically.

( USE the software in safe mode, Simply choose Safe Mode from the launching menu )

Then Choose Clean and restart to Remove the Drivers.

Wait while DDU removes your drivers. Once DDU removes the drivers and restarts your pc, then Windows 10 will automatically update default drivers. Now rerun the game and check if the problem exists or not.

Your league of legends launcher shortcut may be problematic and cause launching issues. So, launching directly from the installation directory can solve the problem. To do that,

Step 1: Go to league of the legends installation directory ( Folder where the game installed )

By default, you can find it here: C:/Riot GamesLeague of Legends

Step 2: After opening the directory, double click on LeagueClient.exe

It should be open smoothly, If it runs normally, remove the old shortcut and create a new shortcut of LeagueClient.exe.

Step 3: Now find out user.cfg file and open with Notepad

Step 5: Save the file and launch the game.

Step 6: Once the game launched, go to your league of legends installation folder again

During our survey, most users fix their lol launching issue by editing user.cfg file and deleting LeagueClient.exe file.

If no methods work for you, you should try to uninstall the game and give a fresh install. This should fix bugs related to game installation.

You have to make sure there are no residual remains from the old installation. To do that, we suggest you to use 3rd party uninstaller like IOBit Uninstaller

It will remove all files and registry entries related to the previous installation. So, you can make a fresh install. After reinstallation, your problem should be solved by now.

Go to your antivirus software > Go to settings > Exclusions tab > select league of legends and save.

Now try to launch the game to check if it was blocked by antivirus or not.

Step 3: Now go to the game Download directory and delete all contents

Step 4: Go to the solutions directory and remove the client folder

This time Launch the game as administrator, and your opening issue should be fixed.

Fix 8: Run as administrator and Repair the game

Step 2: After the launcher opening, click on the Cogwheel icon ( right upper corner ) and select Repair.

Step 3: Wait for repair process completion. It may take time, so you should wait for it.

Conclusion about league of legends not opening

League of Legends developers tried their best to fix all bugs during updates, but sometimes windows 10 users have to face issues like league clients not opening. Corrupt shortcut, user.cfg files can cause it. Due to the problem users may face black screen, LeagueClient.exe not opening at all, popup message showing Game does not start etc. But if you follow our proven methods, then you can quickly fix the problem. So, go through our fixes carefully and follow instructions.

Why is my League of Legends not opening?

Answer: League of Legends may not launch due to corrupt shortcut and user.cfg files. There could be many other reasons behind not opening. But you can easily solve them by following our fixes.

Why does my League of Legends keep crashing at the loading screen?

Answer: Due to corrupt game files, League of Legends may crash at the loading screen. Follow our fix number 8 to repair the corrupt files and reinstall the game.

Why is LOL client black?

How do I reinstall League of Legends?

Answer: If you face bugs like lol not opening, then you have to reinstall the league of legends. You have to remove the previous installation package before making another installation. To do that, follow our fix number 5.

Why does my league randomly crash?

Answer: On Windows 10, users face this bug due to antivirus block, lack of graphics memory space or video graphics, corrupt graphics drivers. You can try to upgrade your graphics card and drivers to solve the problem.

How to fix Razer synapse not opening error in windows 10?

How To Fix MSI Gaming App Not Opening on Windows 10

How to fix skse64 not working error?